A Brief History: A Dream is Born 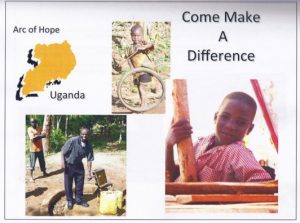 Fr. Simon Peter Kyambadde, a native of Uganda, attended Mundelein Seminary near Chicago. After the completion of his doctoral work, he returned to Uganda. However, since 2000, he has returned to the U.S. every summer to serve as a visiting priest at St. Joan of Arc in Evanston, IL. From the very beginning, a strong relationship was formed between the people of SJA and this extraordinary young priest.

As the people of St. Joan of Arc learned more about Uganda and the villages ministered to by Fr. Simon Peter, they sought ways to help. Initially, people donated shoes, mosquito nets, and blankets. Soon after that, enough money was raised to build wells for clean, accessible drinking water. The people of Evanston began to see the impact they could have across the world.

Simon Peter’s bigger dream, though, was to make a more lasting impact on the Ugandan people he served. He believed the answer to that dream was education. The vision for St. Joan of Arc Day and Boarding School was born.

Upon his return to Evanston the next year, Simon Peter recruited several parishioners for seed money to begin the project. Despite the long odds, Simon Peter’s vision and resolve saw to the completion of an initial school building. In February 2008, with an enrollment of 267, the doors of the new school were opened. To cement the relationship, the school was named St. Joan of Arc Day and Boarding School, Mawuuki.

With each subsequent annual visit, Simon Peter spoke of the great need of Mawuuki, and the clear success and impact of the school. The support from SJA Evanston, as well as from Simon Peter’s contacts in the Kansas City Archdiocese and the greater Chicago area, enabled the school to pay its operating expenses, and expand its facilities.

Each year, the SJA Uganda grows its campus and its impact on the community.

Where Are We Now?

With overwhelming demand in the community for a quality education, SJA Uganda has grown to over 600 children and has been rated in the top 3% of elementary schools in the entire country of Uganda. The campus now includes classroom buildings, a meeting hall, a new kitchen building, two faculty housing units, and dormitories for both boys and girls.

Why Arc of Hope? Is This a Catholic Mission?

Looking to the future, SJA parishioners formed a separate non-profit foundation, Arc of Hope, to support Simon Peter’s initiative and to solicit support from a broader base of donors.

While SJA Uganda is led by a Catholic priest and is proudly a faith-based, non-governmental initiative, the school serves its community, which includes a significant Muslim population, as well as non-Catholic evangelical Christians. Arc of Hope and St. Joan of Arc Uganda have a mission of social justice. Our mission is to change lives through education.

Arc of Hope exists to support the continued expansion of SJA Mawuuki,  through support of both the school and the surrounding area. The goal is to enable the local community to become self-supporting by creating a sustainable base of agriculture and related products.

What Does This Mean to Us in the U.S.?

SJA Evanston, the inaugural source of support for Arc of Hope, has benefited in untold ways from the privilege of supporting this cause, beginning with a first-person understanding of the challenges facing the people of Uganda. The school is designed to be a place of peace, love and learning amidst a most difficult African environment often characterized by poverty, ethnic and religious tension, marginalization of young women and a general lack of opportunity.

The mission has also heightened awareness of the need to think outside our local community, and to live in gratitude for our own blessings. Most people of good will imagine what it would be like if the world were better than it is; Fr. Simon Peter is one of those rare individuals who boldly steps past the imagining and makes change happen.

Sign up for an Amazon Smile account and select Arc of Hope Uganda as your charity and we’ll get .5% of your total order at no additional cost to you.

Your information will not be shared with anyone.